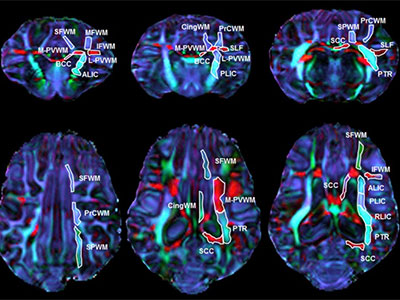 Nobuyuki Ishibashi, M.D., and a team of researchers looked the effects of cardiopulmonary bypass surgery on the white matter of an animal model.

Mortality rates for infants born with congenital heart disease (CHD) have dramatically decreased over the past two decades, with more and more children reaching adulthood. However, many survivors are at risk for neurodevelopmental abnormalities  associated with cardiopulmonary bypass surgery (CPB), including long-term injuries to the brain’s white matter and neural connectivity impairments that can lead to neurological dysfunction.

“Clinical studies have found a connection between abnormal neurological outcomes and surgery, but we don’t know what’s happening at the cellular level,” explains Nobuyuki Ishibashi, M.D., Director of the Cardiac Surgery Research Laboratory at Children’s National. To help shed light on this matter, Ishibashi and a team of researchers looked at the effects of CPB on the white matter of an animal model.

The research team randomly assigned models to receive one of three CPB-induced insults: a sham surgery (control group); full-flow bypass for 60 minutes; and 25°C circulatory arrest for 60 minutes. The team then used fractional anisotropy — a technique that measures the directionality of axon mylenation — to determine white matter organization in the models’ brains. They also used immunohistology techniques to assess the integrity of white matter oligodendrocytes, astrocytes and microglia.

The results, published in the Journal of the American Heart Association, show that white matter experiences region-specific vulnerability to insults associated with CPB, with fibers within the frontal cortex appearing the most susceptible. The team also found that fractional anisotropy changes after CPB were insult dependent and that regions most resilient to CPB-induced fractional anisotropy reduction were those that maintained mature oligodendrocytes.

From these findings, Ishibashi and his co-authors conclude that reducing alterations of oligodendrocyte development in the frontal cortex can be both a metric and a goal to improve neurodevelopmental impairment in the congenital heart disease population. “Because we are seeing cellular damage in these regions, we can target them for future therapies,” explains Ishibashi.

The study also demonstrates the dynamic relationship between fractional anisotropy and cellular events after pediatric cardiac surgery, and indicates that the technique is a clinically relevant biomarker in white matter injury after cardiac surgery.