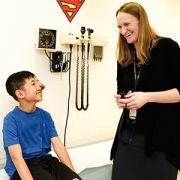 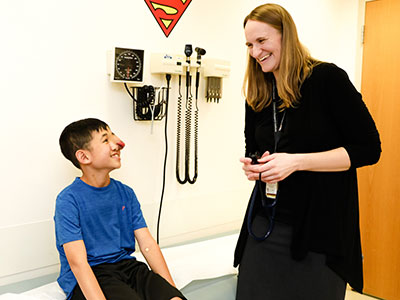 Dr. Bornhorst talks with her patient Maddox Gibson, who is part of the compassionate use trial of selumentinib for which she serves as site principal investigator.

Ongoing pre-clinical studies made possible by national and international neurofibromatosis research collaborations demonstrated that this same pathway is overactive in children with NF1 who have plexiform neurofibromas. The compelling findings from these studies set the stage for clinical trials to test the safety and efficacy of selumetinib and other MEK inhibitors as a therapy for pediatric NF1 patients with inoperable plexiform neurofibromas.

At Children’s National, these studies are run by clinicians such as Miriam Bornhorst, M.D., clinical director of the Gilbert Family Neurofibromatosis Institute and AeRang Kim, M.D., Ph.D. Children’s is one of only four sites in the United States to participate in a National Institutes of Health-led clinical trial to study the use of selumetinib in NF1. Dr. Kim is the site principal investigator and Dr. Bornhorst serves as co-principal investigator on phase 2 of the trial.

“Any time we find a medication that works with NF1, we’re excited, especially because for so many years, we didn’t have any of these options for these families,” Dr. Bornhorst says. “We’re offering something these families have never had before – a treatment that may stop growth and maybe even keep these tumors from returning. It means we’re doing more than managing symptoms – we’re really treating them.”

NF1 affects a relatively small number of people, particularly children. However, researchers and clinicians who are dedicated to the condition have banded together via collaborations and consortia to fuel research and development of new therapies across multiple institutions in the U.S. and abroad.

“Patients come to see me who’ve been at our clinic for years and I’ll talk about MEK inhibitors, and they are just shocked to hear there may be a new option,” Dr. Bornhorst says.

The NIH trial continues to collect data at four U.S. centers, with the ultimate goal of submitting the results for FDA review. Additional data is also collected from patients who didn’t qualify for the trial but who received the drug for compassionate use, an effort led by Dr. Bornhorst. The information collected from that compassionate use trial also helps investigators make the case to broaden the eligibility criteria for future trials.

“The medications are showing that they work,” Dr. Bornhorst notes. “Now we need to determine how to identify the patients who we know will need these therapies.”

To meet that need, other studies, led by both Dr. Bornhorst and Dr. Kim, seek radiographic and blood biomarkers that will identify children with NF1 who are more likely to develop plexiform neurofibromas, and whose plexiforms may progress to something malignant. 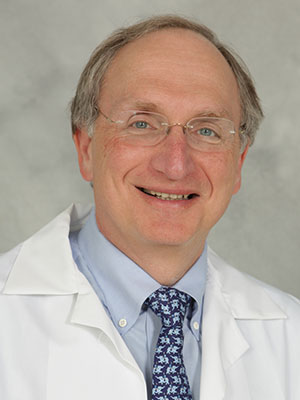 One of 16 steering committees formed in response to the recommendations of the Clinical Trials Working Group mandated by the National Cancer Advisory Board (NCAB), the BMSC’s goal is to promote the best clinical and translational research for patients with brain cancer by critically reviewing Phase 2 and Phase 3 clinical trial concepts.

Dr. Packer also directs the Brain Tumor Institute and is principal investigator for the Pediatric Brain Tumor Consortium (PBTC), formed under the auspices of the National Cancer Institute (NCI). He has worked closely with the NCI and the National Institute of Neurological Disorders and Stroke (NINDS), and has served on multiple committees setting the directions for neurologic clinical and basic science research for the future. Much of Dr. Packer’s clinical research has been translational in nature. He has been part of studies evaluating the molecular genetics of childhood and adult neurologic diseases, and has also coordinated the first gene therapy study for children with malignant brain tumors in the U.S.

Fewer than 50 percent of pharmaceuticals approved by federal authorities are explicitly approved for use in kids, and even fewer devices are labeled for pediatric use.

Fewer than 50 percent of pharmaceuticals approved by federal authorities are explicitly approved for use in kids, and even fewer devices are labeled for pediatric use. Congress has offered incentives to manufacturers who study their treatments in children, but the laws do not require drug makers to demonstrate statistical significance or for the clinical trial to improve or extend children’s lives.

To overcome such daunting obstacles, the American Society of Pediatric Nephrology established a Therapeutics Development Committee to forge more effective public-private partnerships and to outline strategies to design and carry out pediatric nephrology clinical trials more expeditiously and effectively.

“We have seen how other pediatric subspecialties, such as cancer and arthritis, have leveraged similar consortia to address mutual concerns and to facilitate development of new therapeutics specific to those diseases,” says Marva Moxey-Mims, M.D., chief of the Division of Nephrology at Children’s National Health System and a founding committee member. “As a group, we aim to collectively identify and remedy the most pressing needs in pediatric nephrology. As just one example, the committee could help to increase the number of sites that host research studies, could expand the pool of potential study volunteers and could lower the chances of duplicating efforts.”

A paper summarizing their efforts thus far, “Enhancing clinical trial development for pediatric kidney diseases,” written by Dr. Moxey-Mims and 15 co-authors, was published online Aug. 30 by Pediatric Research. The journal’s editors will feature the review article in the “Editor’s Focus” of an upcoming print edition of the publication.

The committee is comprised of academic pediatric nephrologists, patient advocates, private pharmaceutical company representatives and public employees at the Food and Drug Administration and the National Institutes of Health. But it is likely to grow in size and in stakeholder diversity.

Already, committee members have learned that they achieve better results by working together. Early communication can avoid flaws in designing clinical trials, such as overestimating the volume of clinical samples that can feasibly be collected from a small child, or that could misinterpret the type of data needed to secure federal approval.

According to the study authors, both groups understand the critical role that patients and families can play in early research study design, such as accelerating patient recruitment, bolstering the credibility of research and helping to translate research results into actual clinical practice.

“We are pleased to have created a forum that allows participants to share valuable viewpoints and concerns and to understand how regulations and laws could be changed to facilitate development of effective medicines for children with kidney disease,” says Dr. Moxey-Mims. “We hope the relationships and trust forged through these conversations help to speed the development and approval of the next generation of therapies for pediatric renal disease.”

Families with children suffering from rare and difficult-to-treat cardiovascular diseases may soon have better access to drugs to treat their often life-threatening conditions. For the first time, experts from the U.S. Food and Drug Administration (FDA), the American College of Cardiology, the American Heart Association and the American Academy of Pediatrics are working together to describe the challenges and opportunities to improve pediatric drug research as shared in a joint statement published online June 29 in the Journal of the American College of Cardiology and Circulation: Cardiovascular Quality and Outcomes.

“Children should have access to the latest advances in treatment and the best care. By challenging the status quo and designing new, safe and effective alternative study designs, we can give them the best opportunity to grow up stronger,” notes David Wessel, M.D., executive vice president and chief medical officer, Hospital and Specialty Services at Children’s National Health System. Dr. Wessel is internationally recognized for his pioneering work in caring for children with heart disease. As the senior author of the new joint statement and principal investigator of the STARTS-1 trial, which is the catalyst for this collaboration, he says he is “optimistic about this forward progress.”

According to the statement, less than 50 percent of drugs approved for use in the United States have sufficient data to support labeling for dosing, safety and efficacy in children. Additionally, a 2008 report by Pasquali et al, which reviewed more than 30,000 records of hospitalized children with cardiovascular disease, found that 78 percent received at least one off-label medication and 31 percent received more than three.

There are numerous challenges in the development and approval of medications for children – especially those with rare diseases – but the paper’s lead author, Craig Sable, M.D., associate division chief of cardiology at Children’s National, says we can and need to do better.

“While randomized clinical drug trials remain the gold standard in advancing care for adults with cardiovascular disease, relying solely on these types of trials for children unnecessarily limits the drugs approved for use in children,” says Dr. Sable. “Through this unique collaboration that unifies the voice of leaders in pediatric cardiology and the FDA, our goal is to provide a framework to better define which drugs are needed and how we can create novel study designs to overcome the current trial barriers.”

To read more about the barriers and ideas presented, please find the full statement here.