Dr. Kim, an oncologist with the Center for Cancer and Blood Disorders and a member of the solid tumor faculty at Children’s National, presented with Dr. Sharma, director of Interventional Radiology at Children’s, on “Interventional Radiology: Technology and Opportunities” in Meet the Expert talks on both Saturday and Sunday of the programme. They discussed background information, preclinical studies, current, ongoing studies of high-intensity focused ultrasound (HIFU), HIFU in combination with heat sensitive formulated chemotherapy and future directions. In 2017, Children’s National was the first U.S. children’s hospital to successfully use MR-HIFU to treat osteoid osteoma, and is currently accruing on early phase studies evaluating HIFU ablation and HIFU in combination with lyso-thermosensitive liposomal doxorubicin for pediatric patients with refractory/recurrent solid tumors.

Dr. Hardy, a pediatric psychologist in the Center for Cancer and Blood Disorders at Children’s, presented on “Brief Psychosocial Screening to Identify Patients in Need of a Mental Health Treatment Referral in a Childhood Cancer Survivorship Clinic.” In his educational lecture, Dr. Hardy described findings that show a brief mental and behavioral health questionnaire given to patients in the Children’s National survivorship clinic is a sensitive screening tool that can identify patients in need of more formal psychosocial evaluation and treatment. He also presented data supporting the use of a lower threshold of psychological symptoms necessary to trigger discussions about mental health treatment compared to previous reports. The key implication of Dr. Hardy’s work is that survivorship clinics lacking embedded psychology support could adopt this questionnaire, which is publically available and translated into 86 languages, to help identify survivors with mental and behavioral health concerns and ensure appropriate referrals are made.

Dr. Dome, Vice President of the Center for Cancer and Blood Disorders, served on the SIOP Scientific Programme Advisory Committee, which selected the topics for presentation.

SIOP provides an international forum for the sharing of new research and ideas related to pediatric oncology. The annual conference furthers the efforts made towards developing new treatments and cures and opens the conversation, encouraging innovation and collaboration with experts from around the world. Children’s National has taken part in SIOP for many years, most recently hosting the meeting in Washington, D.C., in 2017. 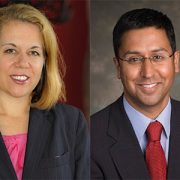 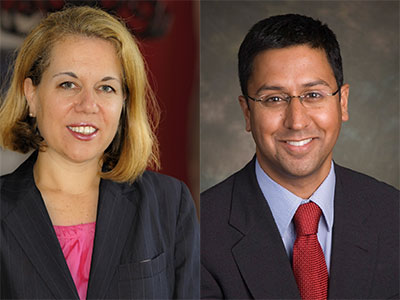 Catherine Bollard, M.D., M.B.Ch.B., has been chosen to serve as director of the Children’s Research Institute’s Center for Cancer and Immunology Research and Hemant Sharma, M.D., M.H.S., will assume the role of chief of the Division of Allergy and Immunology.

Award-winning hematologist and immunotherapist Catherine Bollard, M.D., M.B.Ch.B., currently chief of the Division of Allergy and Immunology, has been chosen to serve as director of the Children’s Research Institute’s (CRI) Center for Cancer and Immunology Research (CCIR). CCIR includes more than 50 clinicians and scientists performing groundbreaking clinical and translational research in understanding the origins of, and developing and testing novel therapies for childhood cancers and immunologic disorders. The center receives more than $10 million annually from the National Institutes of Health and other external entities. In her new role on the leadership team of CCIR, Dr. Bollard will lead the advancement and oversight of cancer and immunology research performed at Children’s National.

“All of the progress made in cellular immunotherapy here at Children’s National can be attributed to Catherine and her leadership,” says Mark L. Batshaw, M.D., chief academic officer and director of CRI. “We are confident her impact will extend even further in her new role.” 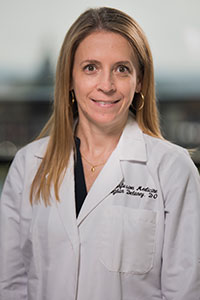 Hemant Sharma, M.D., M.H.S., will assume the role of chief of the Division of Allergy and Immunology. In 2008, he joined the faculty at Children’s National and started the Food Allergy Program, which he directs today. His areas of interest include health disparities and community-based management of food allergy. He is also site principal investigator of novel clinical trials of immunotherapy for peanut allergy. He serves on the Medical Advisory Board of Food Allergy Research and Education (FARE), and was the recipient of the 2016 FARE Vision Award for his contributions to the national food allergy community. Dr. Sharma also serves as the site director of the allergy immunology fellowship program with the National Institutes of Health and has won various teaching awards.

In addition, nationally recognized laboratory medicine expert Meghan Delaney, D.O., M.P.H., has joined Children’s National as chief of pathology and lab medicine. An expert in the field of transfusion medicine, Dr. Delaney will lead efforts to unify Anatomic Pathology and Laboratory Medicine into a single division, while advancing cutting-edge practices in the lab to ensure the highest standard of quality and safety for patients. Dr. Delaney joins Children’s National from Seattle, where she held many leadership positions including serving as medical director at the Pediatric Apheresis Program at Seattle Children’s Hospital & Seattle Cancer Care Alliance, the blood bank at Seattle Children’s Hospital and the Immunohematology & Red Blood Cell Genomics Reference Laboratory at Bloodworks Northwest.

“Dr. Delaney brings extensive experience in laboratory medicine innovation and program-building, and we are confident she will make a lasting impact on our patients,” said Jeffrey Dome, M.D., Ph.D., vice president for the Center for Cancer and Blood Disorders at Children’s National. “Her leadership will bolster our commitment to providing top quality care for our patients through advancement of lab medicine research and treatments.” 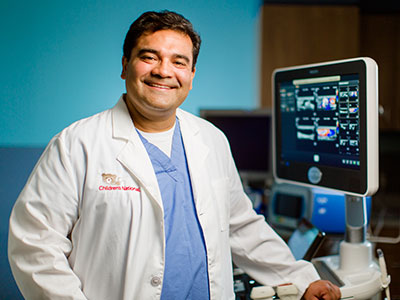 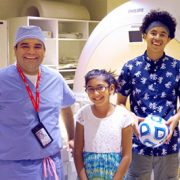 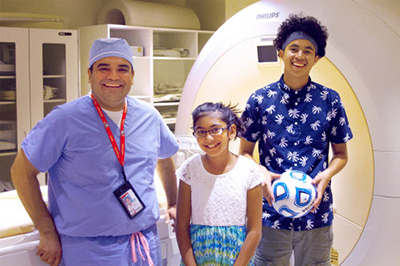 Doctors from the Sheikh Zayed Institute for Pediatric Surgical Innovation and surgeons from Children’s National are the first in the U.S. to use Magnetic Resonance-Guided High-intensity Focused Ultrasound (MR-HIFU) to treat pediatric osteoid osteoma.

The trial, led by Principal Investigator Karun Sharma, M.D., Ph.D., Director of Interventional Radiology at Children’s National, began in 2015 and is demonstrating early success in establishing the safety and feasibility of noninvasive MR-HIFU as an alternative to the current, more invasive approaches to remove tumor tissue.

Osteoid osteoma is a painful, but benign, bone tumor that commonly occurs in children and young adults. Removal generally requires orthopaedic surgery to scrape the tumor from the bone or CT (computerized tomography) image-guided radiofrequency ablation (RFA), which is less invasive than surgery but is associated with ionizing radiation exposure and requires drilling through muscle and soft tissue into bone.

MR-HIFU, on the other hand, is a precise and controlled method that does not require a scalpel or needle, greatly reducing the risk of complications, including infections and bone fractures. Even better, it promises reduced procedure time, typically an hour or less.

“Our team set out to provide a noninvasive and radiation free treatment option for children with osteoid osteoma and our pilot feasibility and safety trial is almost completed. We have treated 9 patients and we’re very pleased with the success of the treatments so far. Although follow up will continue for another year, results to date that show that MR-HIFU may be a completely non-invasive and radiation free treatment for osteoid osteoma,” Dr. Sharma says. “Several of the children we treated were very active prior to the onset of their tumor, one a soccer player and the other a swimmer, but because of pain from the tumor, they were unable to enjoy their favorite activities, until now.”

IGNITE is a joint clinical and research collaboration between the Sheikh Zayed Institute and the Divisions of Radiology, Oncology, Surgery, and Anesthesiology at Children’s National. MR-HIFU is also being used to treat pediatric refractory soft tissue tumors, a first-in-the-world clinical trial that is a collaboration between Children’s National and the NIH Center for Interventional Oncology directed by Bradford Wood, MD. Additionally, the IGNITE team has started preliminary work to explore applications of MR-HIFU for noninvasive ablation of growth plates and pediatric solid tumors.