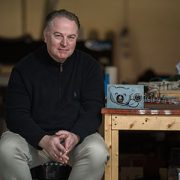 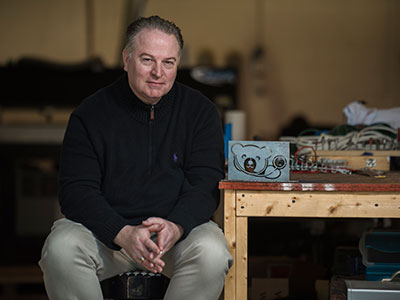 “When I researched how lead aprons are inspected, I learned that a combination of tactile and visual inspection is considered the gold standard. But many of the smallest holes can be missed this way,” says Stanley Thomas Fricke, Nucl. Eng., Ph.D., radiation safety officer at Children’s National Health System and study senior author.

Workers inspecting the lead aprons that shield patients from radiation during imaging tend to use tactile and visual inspections to find defects, running their fingers over the aprons since fingertips can detect even subtle changes to a surface. Yet findings from a new study could influence changes in this approach to improve inspection performance and better protect patients and inspectors.

Infrared (IR) thermal imaging is a much better detective, with 50 percent of study participants picking out all holes intentionally drilled into a test apron compared with just 6 percent of participants who detected the same defects using the tactile method, according to research published online Nov. 8, 2017 in Journal of the American College of Radiology. In addition to being a more accurate way to detect subtle defects, the IR imaging technology also reduces ionizing radiation exposure for inspectors checking the protective power of lead aprons.

“When I researched how lead aprons are inspected, I learned that a combination of tactile and visual inspection is considered the gold standard. But many of the smallest holes can be missed this way,” says Stanley Thomas Fricke, Nucl. Eng., Ph.D., radiation safety officer at Children’s National Health System and study senior author. “Unlike the fingertips, infrared light can penetrate the lead apron’s protective outer fabric and illuminate defects that are smaller than the defect size now used to reject a protective apron. This work challenges conventional wisdom and offers an inexpensive, readily available alternative.”

According to the study team, a growing number of health care settings use radiation-emitting imaging, from the operating room to the dentist’s office. Lead aprons and gonadal shields lower radiation doses experienced by health care staff and patients. In compliance with regulators, these protective devices are inspected regularly. A layer of lead inside keeps patients’ exposure to ionizing radiation at the lowest detectable level. The aprons are covered with nylon or polyester fabric for the patients’ comfort and for ease of cleaning.

“It is standard for health care institutions to use a tactile-visual approach to inspect radiation protective apparel,” Fricke says. “While increasingly common, that inspection method can allow aprons with holes and tears to slip by undetected due to the large surface area that needs to be inspected, the outer fabric that encloses the protective apron and other factors.”

Fricke recalled a news clip from years ago about an IR camera used to film swimmers at the pool that, like Superman’s powerful vision, could see through pool-goers’ clothing. The manufacturer quickly recalled the camera. But the IR technology is a perfect fit for inspectors looking for defects hidden under a lead apron’s fabric cover.

To validate this inspection alternative, the team drilled a series of nine holes ranging from 2 mm to 35 mm in diameter into a “phantom” lead apron and enclosed it within fabric that typically covers the protective shielding. The research team stapled the phantom apron to a wooden frame and placed dry wall under the frame.

Two of 31 radiation workers picked out all nine holes by touch and recorded the holes and their locations on written questionnaires.

For the IR method, the team used an infrared light to illuminate the lead apron from behind and relied on an infrared imaging camera to record 10 seconds of video from which still images were exported. Ten of 20 radiation technologists, radiology nurses and medical doctors identified all nine holes using those color photographs and recorded their entries on a questionnaire. An additional 20 percent identified eight of nine intentional defects to the phantom apron.

In both the tactile and IR groups, all participants found the largest hole and correctly recorded its location.

“Using the tactile method for inspection, most staff who work regularly with radiation-emitting devices were able to identify defects that would cause a lead apron to be rejected, which is 11 mm holes for thyroid shields and 15 mm holes for aprons,” Fricke says. “However, it is standard for these well-used aprons to develop smaller holes—which, over time, become bigger holes. Here at Children’s National, we care about every photon that touches a child.”

In the next phase of the research, the team will explore infrared flash photography, cooling the apron material and the impact of high-resolution cameras with greater depth of field.