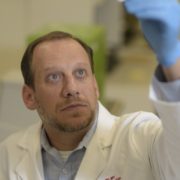 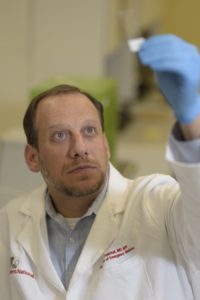 The work that Children’s National Health System physician-scientist Robert J. Freishtat, M.D., M.P.H., and colleagues are doing could soon be a game changer when it comes to early intervention and prevention of obesity-related illnesses.

They already knew there’s a direct relationship between the amount of visceral adipose, or belly fat, a person has and development of some of the most common and life-threatening complications of obesity, including cardiovascular disease and the insulin resistance that leads to diabetes. What remained unclear, until recently, were the precise mechanisms for how the increase in belly fat triggers the onset of additional disease.

Dr. Freishtat, senior author of “Adipocyte-Derived Exosomal miRNAs: A Novel Mechanism for Obesity-Related Disease,” published by Pediatric Research, studies the adipocytes, or fat cells, of visceral adipose in both lean and obese patients to understand exactly how these fat cells can and do wreak havoc — not just locally but throughout the body. Cells leverage exosomes to communicate among themselves, but in overweight patients those cellular communications can go awry.

“As the body’s visceral fat grows, somewhere on the path to obesity the fat cells change and begin to release different exosomes than lean adipose cells do. These new messages disrupt some important processes that eventually prevent the body from effectively dealing with sugar and cholesterol,” says Dr. Freishtat, chief of Emergency Medicine at Children’s National, and associate professor of Pediatrics, Emergency Medicine, and Integrative Systems Biology at the George Washington University.

Dr. Freishtat describes exosomes as “biological tweets”— short messages shed by all cells that allow for intercellular communication and alter gene expression. In the case of the adipocytes that exist in large quantities of visceral fat, these “tweets” actually cause the downregulation of proteins impacting two key signaling pathways — TGF-β and Wnt/β-catenin — associated with controlling chronic inflammation and fibrotic disease throughout the body. These signaling changes make morbidly obese patients more vulnerable to systemwide issues, such as cholesterol accumulation and changes to how the liver processes fat.

Details of the study

The study authors surgically collected fat tissue from lean and obese female patients aged 11 to 19 and used modified bead-based flow cytometry to separate, identify, and compare the exosomal RNA shed by the fat cells in both lean and obese samples. To confirm the unique impact of the obese adipose exosomes on gene expression, the research team then exposed lung cells in vivo to the exosomes shed by both lean and obese adipose. They measured the impact of exposure and uptake on a single receptor type — activin receptor type-2B — known to have a major influence on the TGF-β pathway. The exosomes from obese adipose caused the receptor to slow down, leading to significant changes in the function of the TGF-β pathway.

The team continues to explore how the exosomes shed from excess amounts of visceral adipose spread throughout the body and how the function of organs such as the liver, the heart, and the brain are impacted by the migrating fat cells.

A Look into the future

Successfully identifying and isolating these exosomes also has opened the door to developing a test to detect them, an idea that may permit even earlier intervention to delay or prevent the onset of obesity-related illnesses.

“It is entirely plausible, and is on its way to happening very soon, that someone could walk into their physician’s office for a routine physical and, via a urine test, find out that they are on the road to some dangerous additional side effects of significant weight gain,” says Dr. Freishtat. “That type of early detection could really be a game changer for the millions of Americans who are on track to developing heart, liver, and other diseases resulting from morbid obesity.”