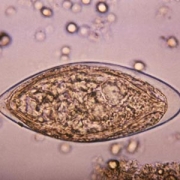 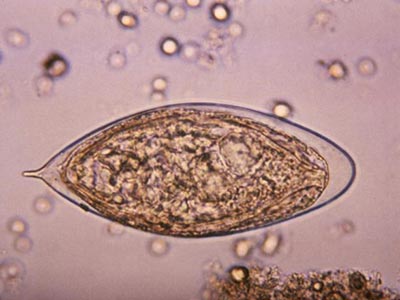 “Urogenital Schistosoma infestation, which is caused by S. haematobium, also causes hemorrhagic cystitis, likely by triggering inflammation when the parasite’s eggs are deposited in the bladder wall or as eggs pass from the bladder into the urinary stream. S. haematobium eggs secrete proteins, including IPSE, that ensure human hosts are not so sickened that they succumb to hemorrhagic cystitis,” says Michael H. Hsieh, M.D., Ph.D.

Every year, hundreds of thousands of U.S. patients – and even more throughout the world – are prescribed cyclophosphamide or ifosfamide. These two chemotherapy drugs can be life-saving for a wide range of pediatric cancers, including leukemias and cancers of the eyes and nerves. However, these therapies come with a serious side effect: Both cause hemorrhagic cystitis in up to 40 percent of patients. This debilitating condition is characterized by severe inflammation in the bladder that can cause tremendous pain, life-threatening bleeding, and frequent and urgent urination.

Infection with a parasitic worm called Schistosoma haematobium also causes hemorrhagic cystitis, but this organism has a fail-safe: To keep its host alive, the parasite secretes a protein that suppresses inflammation and the associated pain and bleeding.

In a new study, a Children’s-led research team harnessed this protein to serve as a new therapy for chemotherapy-induced hemorrhagic cystitis.

“Urogenital Schistosoma infestation, which is caused by S. haematobium, also causes hemorrhagic cystitis, likely by triggering inflammation when the parasite’s eggs are deposited in the bladder wall or as eggs pass from the bladder into the urinary stream. S. haematobium eggs secrete proteins, including IPSE, that ensure human hosts are not so sickened that they succumb to hemorrhagic cystitis,” says Michael H. Hsieh, M.D., Ph.D., senior author of the study published April 3, 2018, by The FASEB Journal. “This work in an experimental model is the first published report of exploiting an uropathogen-derived host modulatory molecule in a clinically relevant model of bladder disease, and it points to the potential utility of this as an alternate treatment approach.”

S. mansoni IPSE binds to Immunoglobulin E (IgE), an antibody produced by the immune system that is expressed on the surface of basophils, a type of immune cell; and mast cells, another immune cell that mediates inflammation; and sequesters chemokines, signaling proteins that alert white cells to infection sites. The team produced an ortholog of the uropathogen-derived protein. A single IV dose proved superior to multiple doses of 2-Mercaptoethane sulfonate sodium (MESNA), the current standard of care, in suppressing chemotherapy-induced bladder hemorrhaging in an experimental model. It was equally potent as MESNA in dampening chemotherapy-induced pain, the research team finds.

“The current array of medicines we use to treat hemorrhagic cystitis all have shortcomings, so there is a definite need for novel therapeutic options,” says Dr. Hsieh, a Children’s National Health System urologist. “And other ongoing research projects have the potential to further expand patients’ treatment options by leveraging other urogenital parasite-derived, immune-modulating molecules to treat inflammatory bowel diseases and autoimmune disorders.”

Future research will aim to describe the precise molecular mechanisms of action, as well as to generate other orthologs that boost efficacy while reducing side effects.

Financial support for this research was provided by National Institutes of Health under award number RO1-DK113504. 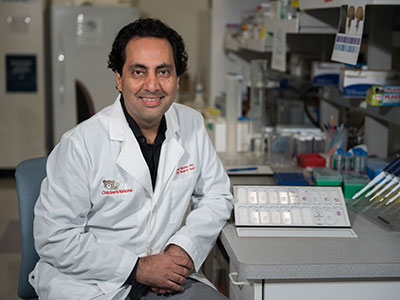 “This is a tremendous opportunity for children and families whose lives have been forever altered by pediatric cancers,” says Javad Nazarian, Ph.D., M.S.C., principal investigator in the Center for Genetic Medicine Research and scientific director of the Brain Tumor Institute at Children’s National.

Speeding research into pediatric cancers and other diseases relies not only on collecting good data, but making them accessible to research teams around the world to analyze and build on. Both efforts take time, hard work and a significant amount of financial resources – the latter which can often be difficult to attain.

In a move that could considerably advance the field of pediatric cancer, the National Institutes of Health (NIH), a body that funds biomedical research in the United States, recently awarded a public-private research collective that includes Children’s National Health System up to $14.8 million to launch a data resource center for cancer researchers around the world in order to accelerate the discovery of novel treatments for childhood tumors. Contingent on available funds, five years of funding will be provided by the NIH Common Fund Gabriella Miller Kids First Pediatric Research Program, named after Gabriella Miller, a 10-year-old child treated at Children’s National.

As principal investigators, researchers at Children’s Hospital of Philadelphia will lead the joint effort to build out the “Kids First” Data Resource Center. Children’s National in Washington, D.C., will spearhead specific projects, including the Open DIPG project, and as project ambassador will cultivate additional partnerships with public and private foundations and related research consortia to expand a growing trove of data about pediatric cancers and birth defects.

“This is a tremendous opportunity for children and families whose lives have been forever altered by pediatric cancers,” says Javad Nazarian, Ph.D., M.S.C., principal investigator in the Center for Genetic Medicine Research and scientific director of the Brain Tumor Institute at Children’s National. “From just a dozen samples seven years ago, Children’s National has amassed one of the nation’s largest tumor biorepositories funded, in large part, by small foundations. Meanwhile, research teams have been sequencing data from samples here and around the world. With this infusion of federal funding, we are poised to turn these data into insights and to translate those research findings into effective treatments.”

This new phase of funding is aimed at opening access to those genetic sequences to a broader group of investigators around the globe by making hard-to-access data easily available on the cloud. The first project funded will be Open DIPG, run by Nazarian, a single disease prototype demonstrating how the new data resource center would work for multiple ailments.

DIPG stands for diffuse intrinsic pontine glioma, aggressive pediatric brain tumors that defy treatment and are almost always fatal. Just as crowd sourcing can unleash the collective brainpower of a large group to untangle a problem swiftly, open data sharing could accomplish the same for childhood cancers, including DIPG. In addition to teasing out molecular alterations responsible for making such cancers particularly lethal, pooling data that now sits in silos could help to identify beneficial mutations that allow some children to survive months or years longer than others.

“It’s a question of numbers,” Dr. Vilain says. “The bottom line is that making sense of the genomic information is significantly increased by working through large consortia because they provide access to many more patients with the disease. What is complicated about genetics is we all have genetic variations. The challenge we face is teasing apart regular genetic variations from those genetic variations that actually cause childhood cancers, including DIPG.”

Nazarian predicts some of the early steps for the research consortium will be deciding nuts-and-bolts questions faced by such a start-up venture, such as the best methods to provide data access, corralling the resources needed to store massive amounts of data, and providing data access and cross correlation.

“One of the major challenges that the data resource center will face is to rapidly establish physical data storage space to store all of the data,” Nazarian says. “We’re talking about several petabytes—1,000 terabytes— of data. The second challenge to address will be data dissemination and, specifically, correlation of data across platforms representing different molecular profiles (genome versus proteome, for example). This is just the beginning, and it is fantastic to see a combination of public and private resources in answering these challenges.” 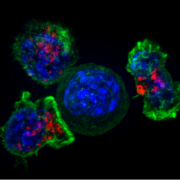 June 6, 2016 –Targeting tumors more precisely, with fewer lasting side effects for kids
Pediatric patients with cancer are often treated with a cocktail of therapies to attack the disease through a variety of mechanisms. While this approach has been instrumental in saving children’s lives, the life-saving therapies can be accompanied by acute side effects, and the treatments may have lingering impacts as cancer survivors enter adulthood. Magnetic resonance-guided high-intensity focused ultrasound (MR-HIFU) holds the promise of surgically removing large tumors without exacting the same array of harsh side effects. Ultrasound relies on high-frequency sound waves to make diagnostic images, and those same sound waves can be used therapeutically to destroy tumors. Layering on MR imaging gives clinicians the ability to precisely guide the ultrasound therapy in real time. A study led by Children’s National Health System researchers and clinicians is using MR-HIFU for the first time in children to examine its safety and feasibility.

May 11, 2016 – Quantitative MRI criteria for optic pathway enlargement in neurofibromatosis type 1
Symptoms of neurofibromatosis type 1 (NF1) vary widely, but the condition is characterized by changes in skin pigmentation and growth of tumors along nerves. The research team sought to determine quantitative size thresholds for enlargement of the optic nerve, chiasm, and tract in children aged 0.5 to 18.6 years with NF1. The study, published in Neurology, found that quantitative reference values for anterior visual pathway enlargement will enhance development of objective diagnostic criteria for optic pathway gliomas secondary to NF1. 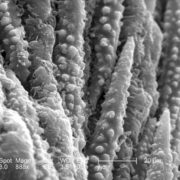 June 16, 2016 – Increased identification of the primary care provider as the main source of asthma care among urban minority children
The research team used electronic communication between an asthma specialty clinic and short-term care coordination to encourage parents of urban youth with asthma to identify their primary care provider as the key source for episodic asthma care – rather than the emergency department. Guardians of 50 children were enrolled in the prospective cohort study, whose findings were published in Journal of Asthma. The youths’ median age was 5.8 years; 64 percent were male, 98 percent were African American. At three and six months after the intervention, 85 percent and 83 percent, respectively, reported that the primary care provider was their child’s primary asthma healthcare provider, compared with 70 percent at baseline.

June 16, 2016 – Two sampling methods yield distinct microbial signatures in the nasopharynges of asthmatic children
The nasopharynx acts as an anatomical reservoir from which pathogenic microbes spread to the lower and upper respiratory airways, causing respiratory infections. A team led by Children’s National researchers used targeted 16S rRNA MiSeq sequencing and two techniques – nasal washes and nasal brushes – to characterize the nasopharyngeal microbiota in 30 children with asthma aged 6 to 17. The authors report in Microbiome that the children’s nasopharyngeal microenvironments contain microbiotas with different diversity and structure.