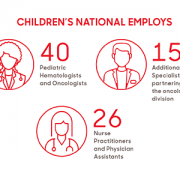 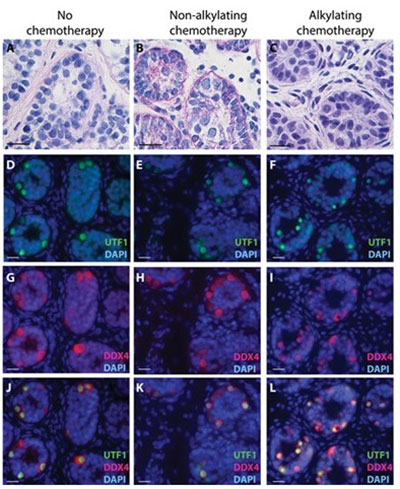 Confirming the presence of germ cells in testicular tissues obtained from patients. Undifferentiated embryonic cell transcription factor 1 (UTF1) is an established marker of undifferentiated spermatogonia as well as the pan-germ cell marker DEAD-box helicase 4 (DDX4). UTF1 (green) and/or DDX4 (red) immunostaining was confirmed in 132 out of 137 patient tissues available for research, including patients who had received previous non-alkylating (B, E, H, K) or alkylating (C, F, I, L) chemotherapy treatment. © The Author(s) 2019. Published by Oxford University Press on behalf of the European Society of Human Reproduction and Embryology.

Testicular tissue samples obtained from 189 males who were facing procedures that could imperil fertility were cryopreserved at one university, proving the feasibility of centralized processing and freezing of testicular tissue obtained from academic medical centers, including Children’s National, scattered around the world.

“It’s not surprising that the University of Pittsburgh would record the highest number of samples over the eight-year period (51 patients), given its role as the central processing facility for our recruiting network of academic medical centers,” says Michael Hsieh, M.D., Ph.D., director of transitional urology at Children’s National. “Children’s National recruited the third-highest number of patients, which really speaks to the level of collaboration I have with Jeff Dome’s team and their commitment to thinking about the whole patient and longer-term issues like fertility.”

An estimated 2,000 U.S. boys and young men each year receive treatments or have cancers or blood disorders that place them at risk for infertility. While older youths who have undergone puberty can bank their sperm prior to undergoing sterilizing doses of chemotherapy or radiation, there have been scant fertility preservation options for younger boys. However, some older adolescents and young men are too sick or stressed to bank sperm. For patients with no sperm to bank or who are too sick or stressed to bank sperm, the experimental procedure of freezing testicular tissue in anticipation that future cell- or tissue-based therapies can generate sperm is the only option.

“This study demonstrates that undifferentiated stem and progenitor spermatogonia may be recovered from the testicular tissues of patients who are in the early stages of their treatment and have not yet received an ablative dose of therapy. The function of these spermatogonia was not tested,” writes lead author Hanna Valli-Pulaski, Ph.D., research assistant professor at the University of Pittsburgh, and colleagues in a study published online May 21, 2019, in Human Reproduction.

Right now, hematologists and oncologists discuss future treatment options with patients and families, as well as possible long-term side effects, including infertility. At Children’s National, they also mention the ongoing fertility preservation study and encourage families to speak with Dr. Hsieh. He meets with families, explains the study goals – which include determining better ways to freeze and thaw tissue and separating malignant cells from normal cells – what’s known about experimental fertility preservation and what remains unknown. Roughly half of patients decide to enroll.

“This study is unique in that there is definitely a potential direct patient benefit,” Dr. Hsieh adds. “One of the reasons the study is compelling is that it presents a message of hope to the families. It’s a message of survivorship: We’re optimistic we can help your child get through this and think about long-term issues, like having their own families.”

In this phase of the study, testicular tissue was collected from centers in the U.S. and Israel from January 2011 to November 2018 and cryopreserved. Patients designated 25% of the tissue sample to be used for the research study; 75 percent remains stored in liquid nitrogen at temperatures close to absolute zero for the patient’s future use. The fertility preservation patients ranged from 5 months old to 34 years old, with an average age of 7.9 years.

The research team found that the number of undifferentiated spermatogonia per seminiferous tubule increase steadily with age until about age 11, then rise sharply.

“We recommend that all patients be counseled and referred for fertility preservation before beginning medical treatments known to cause infertility. Because the decision to participate may be delayed, it is encouraging that we were able to recover undifferentiated spermatogonia from the testes of patients already in the early stages of chemotherapy treatments,” Dr. Hsieh says.