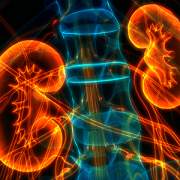 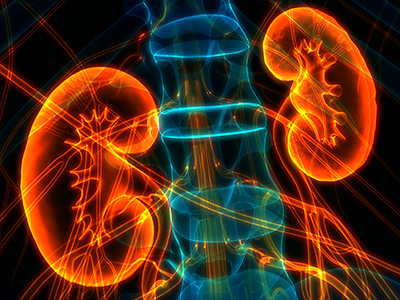 In a new study published in the Journal of Pediatric Urology, Aaron Krill, M.D., urologist at Children’s National Hospital and leading author, shows that halftime from a single initial diuretic renogram in children with antenatally detected UPJO is predictive not only of worsening future drainage, but also of future surgical repair (pyeloplasty).

In a new study published in the Journal of Pediatric Urology, Aaron Krill, M.D., urologist at Children’s National Hospital and leading author, shows that halftime (T1/2) from a single initial diuretic renogram in children with antenatally detected UPJO is predictive not only of worsening future drainage, but also of future surgical repair (pyeloplasty).

The findings of the paper show promising results that will help to further subdivide the indeterminate drainage range and will help practitioners identify those children at increased risk for worsening drainage and future surgery.

“Among infants with UPJO, 52% to 79% can be expected to undergo spontaneous improvement,” said Dr. Krill.

“This would allow us to concentrate our efforts appropriately on those who are at high risk of progressing to surgery and minimize the burden of testing and that of radiation exposure for children who are at low risk and likely to improve spontaneously,” Dr. Krill added.

Researchers identified patients younger than 18 months at presentation with unilateral, isolated moderate to severe hydronephrosis who underwent diuresis renography from 2000-2016. This group was sub-divided into three T1/2 intervals: 5-20, 21-40 and 41-60 minutes. Endpoints were pyeloplasty and pyeloplasty free survival. Indications for surgery were loss of DRF, worsening T1/2, family preference and/or pain.

“Being told that your newborn has an obstructed kidney and may require surgery in the future is typically a very stressful event for families,” Dr. Krill said. “Now after only a single diuretic renogram, we can provide families with accurate probability estimates of their child’s lifetime risk of surgery and risk of surgery within their first five years. This should allow us to appropriately set expectations and customize our surveillance routine for each patient.”

For decades, Children’s National has been working to refine and standardize diuretic renography. Some accomplishments over the years include establishing the safety of the test in infants, verifying its diagnostic utility, identifying new drainage parameters, and coupling it with machine learning to improve accuracy. This most recent manuscript capitalizes on a large database spanning 20 years of the team’s clinical experience to further improve the ability to predict who will need surgical repair and better counsel our patients. 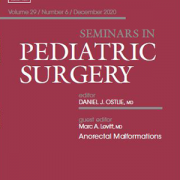 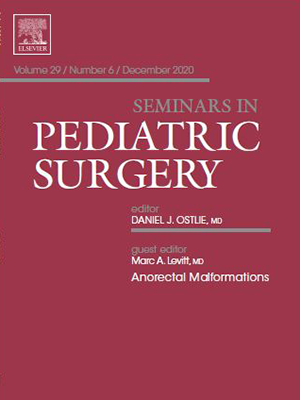 Marc Levitt, M.D., served as guest editor of a special December Seminars in Pediatric Surgery dedicated to the care and treatment of anorectal malformations.

By Marc Levitt, M.D., chief of the Division of Colorectal and Pelvic Reconstruction at Children’s National Hospital

I was honored to serve as the Guest Editor on the topic of “Anorectal Malformations” in the prestigious Seminars in Pediatric Surgery Volume 29, Issue 6, December 2020.

The series of articles included in this collection illustrate new techniques and ideas that over time have made a dramatic and positive impact on the care and quality of life of children who suffer from colorectal problems. With an integrated approach to the care of this complex group of patients, great things can be achieved. As we endeavor to advance this field, we need to always remember that, as Alberto Pena, M.D., often said, “it is not the unanswered questions, but rather the unquestioned answers that one must pursue.”

In my own article on advances in the field, a 2021 update, I reproduce a piece by my daughter, Jess Levitt, who wrote something applicable to the care of children with colorectal problems, with the message that helping to create order is vital to improve a somewhat chaotic medical process traditionally available for the care of complex care. Her essay is reproduced here:

“A” must come before “B,” which must come before “C,” everybody knows that. But what if the Millercamp’s of this world did not have to sit next to the Millerchip’s when it comes to seating arrangements? Can Pat Zawatsky be called before Jack Aaronson when the teacher is taking attendance? Do those 26 letters that make up all the dialogue, signs, thoughts, books, and titles in the English-speaking departments of the world need their specific spots in line? Everyone can sing you the well-known jingle from A to Z, but not many people can tell you why the alphabet is the way it is. For almost as long as humans have had the English language, they have had the alphabet. The good ole ABCs.

However, the alphabet represents the human need for order and stability. I believe that the same thinking that went into the construct of time and even government went into the alphabet. Justifiably, lack of order leads to chaos. Knife-throwing, gun-shooting chaos, in the case of lack of governmental order. Listen to me when I tell you that there is absolutely no reason that the alphabet is arranged the way that it is. Moreover, the alphabet is simply a product of human nature and how it leads people to establish order for things that do not require it.

Now I know this sounds crazy but bear with me. Only if you really peel away the layers of the alphabet will you find the true weight it carries. People organized the letters of our speech into a specific order simply because there wasn’t already one. Questioning this order will enlighten you on the true meaning of it. Really dig deep into the meaning behind the social construct that is the alphabet. Short and sweet as it may be, the order of the ABCs is much less than meets the eye. There is no reason that “J” should fall before “K!” Understand this. Very important as order is, it is only a result of human nature.  What’s next? X-rays become independent of Xylophones in children’s books of ABCs?

You know what the best part is? Zero chance you even noticed that each sentence in this essay is in alphabetical order.

Her literary contribution inspired me to do something similar. Take a look at the list of articles in this Seminars edition:

The first letter of each article forms an acrostic of the word “COLLABORATION” which is the secret sauce behind any success in the field of pediatric colorectal care.