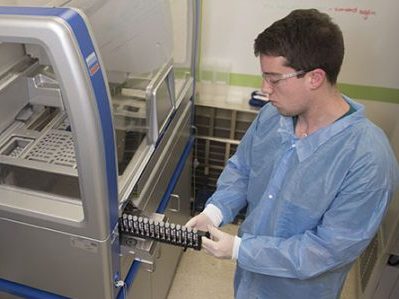 Children’s National research scientists are working to unravel the complicated web of genetic interactions that lead children to develop cleft lip and palate.

On June 26, 2000, scientists around the world hailed the first draft of the human genetic code as a scientific milestone that eventually would revolutionize the practice of medicine. By knowing the approximately 20,000 protein-coding genes for humans, many speculated that researchers and doctors eventually might elucidate the unique factors that influence thousands of diseases—and, someday, make it easier to find custom ways to treat these conditions.

“It is humbling for me and awe inspiring to realize that we have caught the first glimpse of our own instruction book, previously known only to God,” said Francis S. Collins, M.D., Ph.D., who directed the international effort to sequence the human genome and who now directs the National Institutes of Health.

Nearly two decades later, actually using this wealth of information has proven exceedingly more complicated than many envisioned. While some genetic diseases like Huntington’s disease or sickle cell anemia follow a simple pattern in which variations in a single gene lead to deleterious effects, the vast majority of other genetic health problems result from the interaction of multiple genes, from a handful to hundreds.

One condition that has proven especially tricky to understand on the genetic level is cleft lip and palate (CLP), says Youssef A. Kousa, D.O., Ph.D., a pediatric neurology resident at Children’s National Health System who has made human development a central focus of his research program. CLP, which affects about 1 in 1,000 babies born worldwide, can be devastating, Kousa explains. At some point between 6 and 12 weeks gestation, the palate and lip fail to close in some fetuses. Those children are born with a fissure that can significantly impair eating and speaking and that can complicate social interactions.

While researchers have linked some genes to CLP, Kousa says it has become increasingly clear that these genes do not exert their influence in isolation. In a review paper published recently in Developmental Dynamics, he and Brian C. Schutte, Ph.D., of Michigan State University, detail the story of three of those genes. The trio plays a role in CLP but also is implicated in another devastating congenital problem, neural tube defects.

One of these genes is IRF6, which scientists tagged as the gene responsible for inherited forms of CLP called van der Woude syndrome and popliteal pterygium syndrome more than a decade ago. In the interim, research has shown IRF6 also appears to be important in orofacial clefting that occurs independently of these syndromes. Estimates suggest that mutations in IRF6 increase the risk for CLP by 12 percent to 18 percent.

That means at least 80 percent of the risk for clefting is caused by different genes. Kousa and Schutte write that one of these is GRHL3, which also can cause van der Woude syndrome if it is mutated. GRHL3 is regulated by IRF6, Kousa explains. So, if IRF6 does not work properly, neither does GRHL3.

But what regulates IRF6? Upstream of this important gene is another called TFAP2A. The healthy operation of TFAP2A is key for IRF6 and orofacial clefting. Complicating the scenario further, several studies also have shown that TFAP2A is essential for normal development of the palate and neural tube, the embryo’s precursor to the central nervous system that eventually develops into the brain and spinal cord.

To shed light on the interplay of the full array of genes involved CLP, Kousa and colleagues recently published a paper in Birth Defects Research in which they use computer programs to analyze datasets on all genes identified thus far that are involved in orofacial and neural tube development and which molecules these genes produce and target. Their analyses showed that many of these genes are linked in associated pathways that influence vast realms of development, risk of cancer and folate metabolism. (Women who take folic acid supplements before getting pregnant and during pregnancy can reduce birth defect risks.)

By better understanding how these genes are connected into networks, Kousa says, researchers may be able to reduce the risk of both CLP and neural tube defects with a single intervention. However, like the study of genetic diseases itself, finding the right intervention might not be so simple. A drug or supplement that can alleviate one condition might exacerbate others, based on the complicated web of genetic interactions, he says.

“That’s why work from our lab and others is so important,” Kousa says. “It adds layers and layers of knowledge that, eventually, we’ll be able to put together to help prevent these devastating problems.”