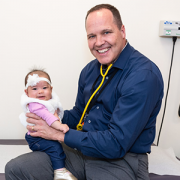 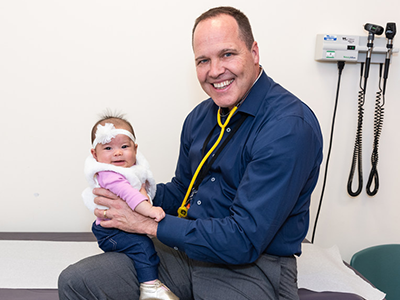 The Feigel family worked with Timothy Kane, M.D., the division chief of general and thoracic surgery at Children’s National, to ensure an accurate diagnosis, coordinate a corrective procedure and support a strong recovery for Kinsley, who just celebrated a 5-month milestone.

On Sept. 30, 2018, Elizabeth Feigel gave birth to a healthy baby girl, Kinsley Feigel. Thirty-two days later, Elizabeth and her husband, Steven Feigel, delighted in another hospital moment: Kinsley, who developed a choledochal cyst in utero, was recovering from a surgical procedure to remove an abnormal bile duct cyst, which also required the removal of her gallbladder.

While the series of events, interspersed with multiple hospital visits, would likely create uneasiness in new parents, the Feigel family worked with Vahe Badalyan, M.D., a gastroenterologist at Children’s National Health System, and with Timothy Kane, M.D., the division chief of general and thoracic surgery at Children’s National, to ensure an accurate diagnosis, coordinate a corrective procedure and support a strong recovery for Kinsley, who just celebrated a 5-month milestone.

One of the keys to Kinsley’s success was close communication between her parents and providers.

Dr. Badalyan and Dr. Kane listened to Elizabeth and Steven’s concerns, explained complex medical terms in lay language, and provided background about Kinsley’s presenting symptoms, risk factors and procedures. Instead of second-guessing the diagnosis, Elizabeth and Steven put their trust into and remained in contact with the medical team, sharing updates about Kinsley at home. This parent-physician partnership helped ensure an accurate diagnosis and tailored treatment for Kinsley.

Here is her story.

During a 12-week prenatal ultrasound, Elizabeth discovered that Kinsley had an intra-abdominal cyst. Before Elizabeth came to Children’s National for an MRI, she met with several fetal medicine specialists and had a variety of tests, including an amniocentesis to rule out chromosomal abnormalities, such as Down syndrome.

The team at Children’s National didn’t want to prematurely confirm Kinsley’s choledochal cyst in utero, but additional ultrasounds and an MRI helped narrow the diagnosis to a few conditions.

After Kinsley was born, and despite looking like a healthy, full-term baby, she was transported to the neonatal intensive care unit (NICU) at Children’s National. Dr. Badalyan and Dr. Kane analyzed Kinsley’s postnatal sonogram and found the cyst was bigger than they previously thought. Over a five-day period, the medical team kept Kinsley under their close watch, running additional tests, including an additional sonogram. They then followed up with Kinsley on an outpatient basis to better understand and diagnose her cyst.

Over the next few weeks, Kinsley, Elizabeth and Steven returned to Children’s National to coordinate multiple exams, ranging from an MRI to a HIDA scan. During this period, Elizabeth and Steven remained in contact with Dr. Badalyan. They heard about Kinsley’s lab results and sent updates about her symptoms, including her stool, which helped the medical team monitor her status.

Meanwhile, Dr. Badalyan and Dr. Kane worked closely with the lab to measure Kinsley’s bilirubin levels. Her presenting symptoms and risk factors, she had jaundice and is a female baby of Asian descent, are associated with both choledochal cysts and biliary atresia.

Over time and with the help of Elizabeth, Steven and the pediatric radiologists, Dr. Badalyan and Dr. Kane confirmed Kinsley had a type 1 choledochal cyst, the most common. Originally, the plan was to operate at three to six months, but Dr. Kane needed to expedite the procedure and operate on Kinsley at one month due to a rise in her bilirubin, a sign of progressive liver disease.

Higher bilirubin levels are common in newborns and remain elevated at about 5 mg/dL after the first few days of birth, but Kinsley’s levels peaked and remained elevated. Instead of her bile flowing into her intestine, her choledochal cyst reduced the flow of bile, which accumulated and started to pour back into her liver. The timing of the surgery was as important as the procedure.

Some hospitals use the da Vinci robot, which starts at 8-mm incisions, the size of a small pearl, to conduct this procedure on infants, but this method cannot effectively be done in very small infants. Instead, Dr. Kane prefers to stitch sutures by hand. This technique keeps the incisions small and is technically demanding, but Dr. Kane doesn’t mind (he views this as an advanced technical skill). The goal for this surgery was to cut out the abnormal piece of Kinsley’s common bile duct, comprised of the cyst, remove  this and then sew the bile duct to the small intestine (duodenum), creating a digestive pathway. The new digestive tube allows for bile to flow from her liver through the common hepatic duct, in place of the pathway where the cyst formed, and into her intestine.

Like other surgeries, Dr. Kane needed to adapt the procedure, especially with Kinsley’s size: Taking too much from the bile duct would create a tight space, and could create obstruction, blocking bile, while leaving too much room could create leakage and spilling of the bile, requiring a follow-up surgical procedure within a week or two of the original operation.

Dr. Kane had a few options in mind before he operated. He didn’t know which would be most suitable until the operation, but he remained open and prepared for all three. Adopting this mindset, instead of having one procedure in mind, has helped Dr. Kane with precise and tailored surgeries, which often result in the best procedure and a stronger recovery period for young patients.

After 4.5 hours, the surgery, a two-part procedure – removing the cyst and recreating a functional bile duct – was complete.

Kinsley moved into the recovery unit, where she rested and recovered under close medical supervision for five days. During the first few days, she didn’t have liquids or milk, but she did have two bedside nurses monitoring her status in addition to surgeons making regular rounds. Elizabeth and Steven were relieved: The diagnosis and surgery were over.

Before Kinsley left the hospital, Elizabeth and Steven scheduled a follow-up visit to ensure Kinsley was recovering well and avoided risk of infection, such as cholangitis, which can occur suddenly and become chronic.

Following Kinsley’s post-surgical bloodwork in early November, Dr. Badalyan noticed Kinsley’s white blood count was high, signaling infection, and he immediately brought the family back to the hospital. To help her body fight the infection, Kinsley received antibiotics and intravenous fluids. She stayed in the hospital for five days. Fortunately, cholangitis is easy to treat with antibiotics; the key is to detect it early.

Kinsley returned home in time for Thanksgiving. She came back to the hospital for biweekly visits. At this point, she was filling out, reaching a 2-month milestone and nearing a full recovery. She returned for follow-up visits in December and January – and has been healthy ever since. She will continue to make routine visits during her first year to ensure her white blood count remains in a healthy range. 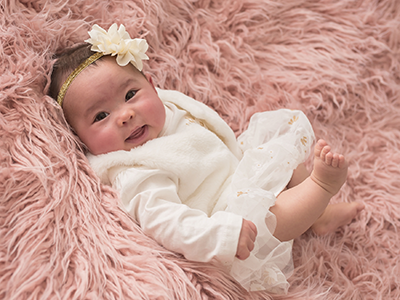 Dr. Badalyan and Dr. Kane envision a healthy future for Kinsley. They don’t expect she’ll need additional operations. Her parents are also looking on the bright side: Since gallbladders aren’t essential for survival or long-term health outcomes, and since many people can easily live without them, Kinsley may be at an advantage. Elizabeth thinks Kinsley may be more cautious about lifestyle choices to support living without a gallbladder, which also support longevity.

Another perspective noted by Dr. Badalyan and Dr. Kane is Kinsley’s resilience factor. Having the surgery earlier brought unique challenges, but her age makes it easier for Kinsley to bounce back as her body rapidly develops. Her tissues were healthy, compared to adult patients undergoing surgery with chronic liver problems or heart disease, which puts her at an advantage for a faster healing process. Dr. Badalyan also mentions that while it’s good for her Kinsley and her family to continue to monitor risks for infections, she won’t have gallstones.

Elizabeth also started to notice something that Kinsley’s doctors likely wouldn’t pick up on: Her personality seems to be a result of her hospital experience and stay. Kinsley’s an easy baby. She eats well and sleeps well, which Elizabeth credits to being around clinicians and to learning the art of self-soothing, a skill she likely acquired while recovering from surgery.

This month, Kinsley has another adventure. She’ll travel with her parents to visit extended family in Seattle, Napa Valley, Calif. and West Virginia. She has several relatives and family friends, all of whom are looking forward to meeting her.