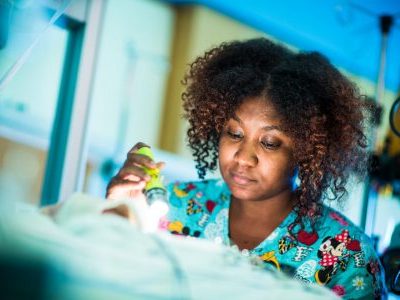 ECMO allows time for the patient’s lungs or heart to heal by using a heart-lung machine to oxygenate and remove carbon dioxide outside the body over a period of time.

Children’s National houses one of the only ECMO programs in the Washington, DC, area. At Children’s, the ECMO program is in the division of Neonatology but closely connected to the Advanced Cardiac Therapies and Heart Transplant Program and the team using Ventricular Assist Devices (VADs) in children. At the time of the interview for this article, the ECMO and VAD Program Manager, Gary Oldenburg, MS, RRT-NPS, said there were currently three ECMO patients and one VAD patient admitted to Children’s.

Oldenburg attributes the success of the program to the quality of patient care, favorable outcomes compared with like-institutions, competency in ECMO training and specialist education, as well as experts in the field who contribute back to the profession of ECMO.

One expert, Billie Lou Short, M.D., Chief of Neonatology at Children’s National, is a pioneer in the use of ECMO for newborns, has been involved with ECMO since its inception, and started the program at Children’s. Oldenburg is on the steering committee with ELSO and also is involved with the Education and Logistics Committee within ELSO.

Also on the team, there are two groups of respiratory therapists and nurses who have specialized training in ECMO, one that is exclusively working with ECMO patients and another that is part-time, borrowed from their home departments.