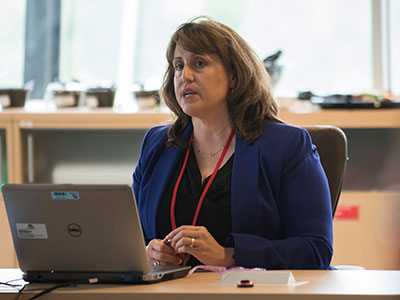 The Congenital Zika Virus Program at Children’s National Health System provides a range of advanced testing and services for exposed and infected fetuses and newborns. Data that the program has gathered in evaluating and managing Zika-affected pregnancies and births may offer instructive insights to other centers developing similar programs.

The program evaluated 36 pregnant women and their fetuses from January 2016 through May 2017. Another 14 women and their infants were referred to the Zika program for postnatal consultations during that time.

“As the days grow shorter and temperatures drop, we continue to receive referrals to our Zika program, and this is a testament to the critical need it fulfills in the greater metropolitan D.C. region,” says Roberta L. DeBiasi, M.D., M.S., chief of the Division of Pediatric Infectious Diseases and co-leader of the program. “Our multidisciplinary team now has consulted on 90 dyads (mothers and their Zika-affected fetuses/infants). The lessons we learned about when and how these women were infected and how their offspring were affected by Zika may be instructive to institutions considering launching their own programs.”

Dr. DeBiasi outlined lessons learned during a pediatric virology workshop at IDWeek2017, one of three such Zika presentations led by Children’s National research-clinicians during this year’s meeting of pediatric infectious disease specialists.

“The Zika virus continues to circulate in dozens of nations, from Angola to the U.S. Virgin Islands. Clinicians considering a strategic approach to managing pregnancies complicated by Zika may consider enlisting an array of specialists to attend to infants’ complex care needs, including experts in fetal imaging, pediatric infectious disease, physical therapists, audiologists, ophthalmologists and radiologists skilled at reading serial magnetic resonance images as well as ultrasounds,” Dr. DeBiasi says. “At Children’s we have a devoted Zika hotline to triage patient and family concerns. We provide detailed instructions for referring institutions explaining protocols before and after childbirth, and we provide continuing education for health care professionals.”

Of the 36 pregnant women possibly exposed to Zika during pregnancy seen in the program’s first year, 32 lived in the United States and traveled to countries where Zika virus was circulating. Two women had partners who traveled to Zika hot zones. And two moved to the Washington region from places where Zika is endemic. Including the postnatal cases, 89 percent of patients had been bitten by Zika-tainted mosquitoes, while 48 percent of women could have been exposed to Zika via sex with an infected partner.

Zika infection can be confirmed by detecting viral fragments but only if the test occurs shortly after infection. Twenty-four of the 50 women (nearly 50 percent) arrived for a Zika consultation outside that 12-week testing window. Eleven women (22 percent) had confirmed Zika infection and another 28 percent tested positive for the broader family of flavivirus infections that includes Zika. Another detection method picks up antibodies that the body produces to neutralize Zika virus. For seven women (14 percent), Zika infection was ruled out by either testing method.