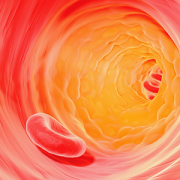 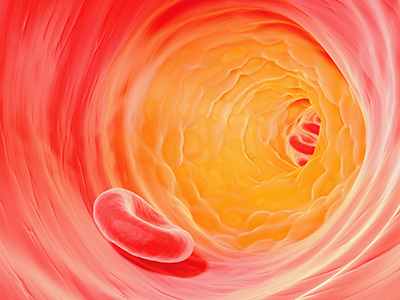 A multi-institutional team led by research faculty at Children’s National in Washington, D.C., finds that extracellular vesicles derived from kids’ fat can play a pivotal role in ratcheting up risk for atherosclerotic cardiovascular disease well before any worrisome symptoms become visible.

According to the Centers for Disease Control and Prevention, about one in five U.S. kids aged 6 to 19 is obese, boosting their risk for a variety of other health problems now and later in life.

One of these is atherosclerosis, a term that translates literally as hardening of the arteries. Atherosclerosis causes blood vessels that carry oxygen-rich blood throughout the body to become inflamed. White blood cells called macrophages settle in the vessel wall, which becomes overloaded with cholesterol. A plaque forms that restricts blood flow. But it remains a mystery how fat cells residing in one place in the body can trigger mayhem in cells and tissues located far away.

Small, lipid-lined sacs called extracellular vesicles (EVs), released by cells into the bloodstream, are likely troublemakers since they enable intercellular communication. Now, a multi-institutional team led by research faculty at Children’s National in Washington, D.C., finds that EVs derived from kids’ fat can play a pivotal role in ratcheting up risk for atherosclerotic cardiovascular disease well before any worrisome symptoms become visible. What’s more, the team showed that EVs found in the body’s fat stores can disrupt disposal of cholesterol in a variety of kids, from lean to obese, the team reports online July 22, 2019, in the Journal of Translational Medicine.

“We found that seven specific small sequences of RNA (microRNA) carried within the extracellular vesicles from human fat tissue impaired the ability of white blood cells called macrophages to eliminate cholesterol,” says Robert J. Freishtat, M.D., MPH, senior scientist at the Center for Genetic Medicine Research at Children’s National and the study’s senior author. “Fat isn’t just tissue. It can be thought of as a metabolic organ capable of communicating with types of cells that predispose someone to develop atherosclerotic cardiovascular disease, the leading cause of death around the world.”

Research scientists and clinicians from Children’s National, the George Washington University, NYU Winthrop Hospital and the National Heart, Lung and Blood Institute collaborated to examine the relationship between the content of EVs and their effect on macrophage behavior. Their collaborative effort builds on previous research that found microRNA derived from fat cells becomes pathologically altered by obesity, a phenomenon reversed by weight-loss surgery.

Because heart disease can have its roots in adolescence, they enrolled 93 kids aged 12 to 19 with a range of body mass indices (BMIs), including the “lean” group, 15 youth whose BMI was lower than 22 and the “obese” group, 78 youths whose BMI was in the 99th percentile for their age. Their median age was 17. Seventy-one were young women. They collected visceral adipose tissue during abdominal surgeries and visited each other’s respective labs to perform the experiments.

“We were surprised to find that EVs could hobble the macrophage cholesterol outflow system in adolescents of any weight,” says Matthew D. Barberio, Ph.D., the study’s lead author, a former Children’s National scientist who now is an assistant professor at the George Washington University’s Milken Institute School of Public Health. “It’s still an open question whether young people who are healthy can tolerate obesity—or whether there are specific differences in fat tissue composition that up kids’ risk for heart disease.”

The team plans to build on the current findings to safeguard kids and adults against future cardiovascular risk.

“This study was a huge multi-disciplinary undertaking,” adds Allison B. Reiss, M.D., of NYU Winthrop Hospital and the study’s corresponding author. “Ultimately, we hope to learn which properties belonging to adipose tissue EVs make them friendly or unfriendly to the heart, and we hope that gaining that knowledge will help us decrease morbidity and mortality from heart disease across the lifespan.” 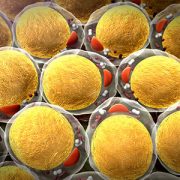 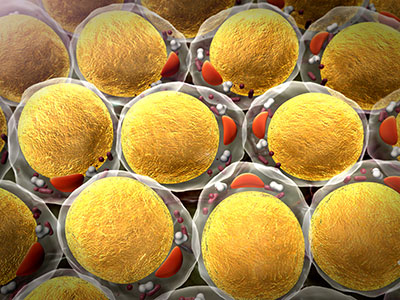 Fat cells from obese patients have the ability to send signals that can accelerate biological processes leading to atherosclerosis.

Share List
Obesity has been linked to a variety of adverse health conditions, including Type 2 diabetes, cancer, heart attack and stroke – conditions that may begin as early as childhood in patients whose obesity also begins early. While this much is known, it has been unclear how extra fat mass might lead to these chronic health conditions.

New research from Children’s National Health System scientists might help answer this question. In findings presented at the 2017 annual meeting of the Pediatric Academic Societies, the research team shows that exosomes – nanosized chemical messages that cells send to each other to regulate protein production – isolated from very obese teenage patients behave very differently from those derived from lean patients and could be key players in heightening the risk of developing atherosclerosis. This hardening of the arteries can, in turn, increase the risk of heart disease and stroke in adulthood.

A research team led by Robert J. Freishtat, M.D., M.P.H., chief of emergency medicine at Children’s National, is exploring possible links between extra belly fat and obesity-related diseases, such as atherosclerosis, a buildup of plaque in arteries that can harden and restrict blood flow. More precise knowledge of the mechanisms by which obesity ratchets up heart risks holds the promise of helping the next generation of kids avoid experiencing chronic disease.

The working theory is that exosomes derived from belly fat from obese patients have the distinct ability to accelerate biological processes leading to atherosclerosis.

The research team isolated exosomes from five obese teenagers and compared them to five sex-matched lean adolescents. It turns out that exosomes derived from fat pick up their marching orders from microRNA content likely to target cholesterol efflux genes, which help reduce cholesterol buildup in cells.

“Atherogenic properties of fat-cell derived exosomes from obese patients differ markedly from the non-atherogenic profile of exosomes from lean patients. It is especially concerning that we see biological clues of heightened risk in teenagers, and the finding underscores how the seeds for atherosclerosis can be planted very early in life,” Dr. Freishtat says.

The presentation is the latest finding from a research team that, over years of work, is unraveling the mechanisms of cellular signaling by fat cells.  By closely examining very obese children – who have the most severe cardiometabolic disease – the team identified strong molecular signals of disease risk that they can search for in leaner patients who may be at risk for disease years from now.

“We know that morbidly obese patients have cardiovascular issues,” explains Dr. Freishtat. “An unanswered question is for patients with no clinical symptoms who are a little overweight. Can we look at them and say whether they are at risk for developing atherosclerosis, insulin resistance or Type 2 diabetes five or 10 years down the line? That’s the whole rationale for doing this work.”

The critical issue is what exosomes are up to. Dr. Freishtat says in lean people, they’re active and are very important in maintaining stable metabolism and homeostatic processes.

“When a person becomes obese, however, exosomes evolve,” he says. “They no longer support insulin signaling, which is helpful, and drive processes in the reverse direction, repressing insulin signaling – which can be harmful,” he adds.

Ultimately, the research team aims to revolutionize how chronic diseases like Type 2 diabetes are diagnosed. For far too long, clinicians have relied on symptoms like high glucose levels and excess urination to diagnose diabetes.

“By the time you have symptoms, it’s too late,” says Dr. Freishtat. “In many cases, damage has been done by relentless exposure to high sugar levels. The biological processes that underlie the Type 2 diabetes process began five, 10, 15 years earlier. If we can detect it earlier, before symptoms arise, intervention is going to have a more significant impact on improving and extending patients’ lives.”