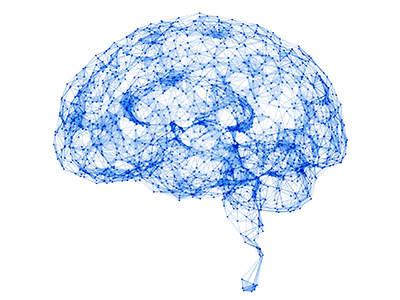 The brain comprises only 2% of the body’s volume, but it uses more than 20% of its energy, which makes this organ particularly vulnerable to changes in metabolism.

The brain comprises only 2% of the body’s volume, but it uses more than 20% of its energy, Smith explains – which makes this organ particularly vulnerable to changes in metabolism. Type 2 diabetes and even prediabetic changes in glucose metabolism inflict damage upon this organ in mechanisms with dangerous synergy, he adds. Insulin resistance itself stresses brain cells, slowly depriving them of fuel. As blood sugar rises, it also increases inflammation and blocks nitric oxide, which together narrow the brain’s blood vessels while also increasing blood viscosity.

When the brain’s neurons slowly starve, they become increasingly inefficient at doing their job, eventually succumbing to this deprivation. These hits don’t just affect individual cells, Smith adds. They also affect connectivity that spans across the brain, neural networks that are a major focus of his research.

While it’s well established that Type 2 diabetes significantly boosts the risk of cognitive decline, Smith says, it’s been unclear whether this process might be halted or even reversed. It’s this question that forms the basis of a collaborative Frontiers grant, $2.5 million from the National Science Foundation split between his laboratory; the lead institution, Stony Brook University; and Massachusetts General Hospital/Harvard Medical School.

Smith and colleagues at the three institutions are testing whether changing the brain’s fuel source from glucose to ketones – byproducts from fat metabolism – could potentially save neurons and neural networks over time. Ketones already have shown promise for decades in treating some types of epilepsy, a disease that sometimes stems from an imbalance in neuronal excitation and inhibition. When some patients start on a ketogenic diet – an extreme version of a popular fat-based diet – many can significantly decrease or even stop their seizures, bringing their misfiring brain cells back to health.

Principal Investigator Smith and his laboratory at the Children’s National Research Institute are using experimental models to test whether ketones could protect the brain against the ravages of insulin resistance. They’re looking specifically at interneurons, the inhibitory cells of the brain and the most energy demanding. The team is using a technique known as patch clamping to determine how either insulin resistance or insulin resistance in the presence of ketones affect these cells’ ability to fire.

They’re also looking at how calcium ions migrate in and out of the cells’ membranes, a necessary prerequisite for neurons’ electrical activity. Finally, they’re evaluating whether these potential changes to the cells’ electrophysiological properties in turn change how different parts of the brain communicate with each other, potentially restructuring the networks that are vital to every action this organ performs.

Colleagues at Athinoula A. Martinos Center for Biomedical Imaging at Massachusetts General Hospital and Harvard Medical School, led by Principal Investigator Eva-Maria Ratai, Ph.D.,  will perform parallel work in human subjects. They will use imaging to determine how these two fuel types, glucose or ketones, affect how the brain uses energy and produces the communication molecules known as neurotransmitters. They’re also investigating how these factors might affect the stability of neural networks using techniques that investigate the performance of these networks both while study subjects are at rest and performing a task.

Finally, colleagues at the Laufer Center for Physical and Quantitative Biology at Stony Brook University, led by Principal Investigator Lilianne R. Mujica-Parodi, Ph.D., will use results generated at the other two institutions to construct computational models that can accurately predict how the brain will behave under metabolic stress: how it copes when deprived of fuel and whether it might be able to retain healthy function when its cells receive ketones instead of glucose.

Collectively, Smith says, these results could help retain brain function even under glucose restraints. (For this, the research team owes a special thanks to Mujica-Parodi, who assembled the group to answer this important question, thus underscoring the importance of team science, he adds.)

“By supplying an alternate fuel source, we may eventually be able to preserve the brain even in the face of insulin resistance,” Smith says. 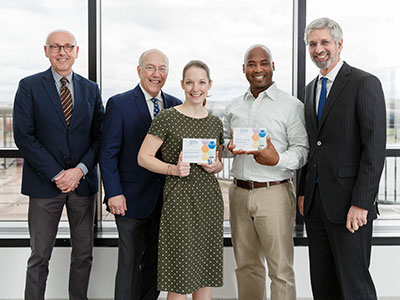 Catherine “Katie” Forster, M.D., M.S., and Nathan Anthony Smith, Ph.D., received the President’s Award for Innovation in Research honoring their respective research efforts to explore an understudied part of the microbiome and to shed light on an underappreciated player in nerve cell communication.

Drs. Forster and Smith received their awards April 19, 2018, the penultimate day of Research and Education Week 2018, an annual celebration of the excellence in research, education, innovation and scholarship that takes place at Children’s National Health System. This year marks the fifth time the President’s Award honor has been bestowed to Children’s faculty.

Dr. Forster’s work focuses on preventing pediatric urinary tract infections (UTIs). Frequently, children diagnosed with illnesses like spina bifida have difficulty urinating on their own, and they often develop UTIs. These repeated infections are frequently treated with antibiotics which, in turn, can lead to the child developing antibiotic-resistant organisms.

“The majority of the time if you culture these children, you’ll grow something. In a healthy child, that culture would indicate a UTI,” Dr. Forster says. “Children with neurogenic bladder, however, may test positive for bacteria that simply look suspect but are not causing infection. Ultimately, we’re looking for better ways to diagnose UTI at the point of care to better personalize antibiotic treatment and limit prescriptions for children who do not truly need them.”

Powered by new sequencing techniques, a research group that includes Dr. Forster discovered that the human bladder hosts a significant microbiome, a diverse bacterial community unique to the bladder. Dr. Forster’s research will continue to characterize that microbiome to determine how that bacterial community evolves over time and whether those changes are predictable enough to intervene and prevent UTIs.

Smith’s work focuses on the role of astrocytes, specialized star-shaped glial cells, in modulating synaptic plasticity via norepinephrine. Conventional thinking describes astrocytes as support cells but, according to Smith, astrocytes are turning out to be more instrumental.

Norepinephrine, a neurotransmitter that plays an essential role in attention and focus, is released by a process known as volume transmission, which is a widespread release of a neurotransmitter at once, says Smith, a principal investigator in Children’s Center for Neuroscience Research. Astrocytes, which outnumber neurons in the brain, are strategically and anatomically located to receive this diffuse input and translate it into action to modulate neural networks.