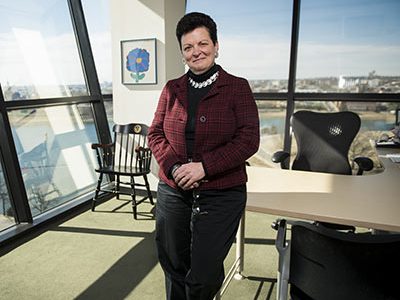 The artist chose tempera paint for her oeuvre. The flower’s petals are the color of Snow White’s buddy, the Bluebird of Happiness. Each petal is accentuated in stop light red, and the blossom’s leaves stretch up toward the sun. With its bold strokes and exuberant colors, the painting exudes life itself.

It’s the first thing Lisa M. Guay-Woodford, M.D., sees when she enters her office. It’s the last thing she sees as she leaves.

Dr. Guay-Woodford, a pediatric nephrologist, is internationally recognized for her research into the mechanisms that make certain inherited renal disorders, such as autosomal recessive polycystic kidney disease (ARPKD), particularly lethal. She also studies disparate health disorders that have a common link: Disruption to the cilia, slim hair-like structures that protrude from almost every cell in the human body and that play pivotal roles in human genetic disease.

Sarah, the artist who painted the bright blue flower more than 20 years ago when she was 8, was one of Dr. Guay-Woodford’s patients. And she’s part of the reason why Dr. Guay-Woodford has spent much of her career focused on the broader domain of disorders tied to just a single defective gene, such as ARPKD.

“It dates back to when I was a house officer and took care of kids with this disorder,” Dr. Guay-Woodford says. “Maybe 30 percent die in the newborn period. Others survive, but they have a whole range of complications.”

Two of her favorite patients died from ARPKD-related reasons in the same year. One died from uncontrolled high blood pressure. The other, Sarah, died from complications from a combined kidney and liver transplant.

“The picture she drew hangs in my office,” she says. “She was a wonderful kid who was really full of life, and what she chose really mirrored who she was as a person. We put up lots of those sorts of those things in my office. It’s a daily reminder of why we do the things we do and the end goal.”

ARPKD is characterized by the growth of cysts in the liver, the kidney – which can lead to kidney failure – and complications within other structures, such as blood vessels in the heart and brain, according to the National Institutes of Health. About 1 in 20,000 live births is complicated by the genetic disorder. The age at which symptoms arise varies.

“Given the way it plays out, starting in utero, this is not a disease we are likely to cure,” she says. “But there are children who have very minimal complications. The near-term goal is to use targeted therapies to convert the children destined to have a more severe disease course to one that is less complicated so that no child suffers the full effects of the disease.”

That’s why it is essential to attain detailed knowledge about the defective gene responsible for ARPKD. To that end, Dr. Guay-Woodford participated in an international collaboration – one of three separate groups that 14 years ago identified PKHD1 as the defective gene that underlies ARPKD.

“The progress has been slow, partly because the gene and its protein products are very complex,” she says. “The good news is the gene has been identified. The daunting news is the identification did not leap us forward. It is just sort of an important step in what is going to be a fits-and-starts kind of journey.”

The field is trying to emulate the clinical successes that have occurred for patients with cystic fibrosis, which now can be treated by a drug that targets the defective gene, attacking disease at a fundamental level. Patient outcomes also have improved due to codifying care.

When she was a resident in the 1980s, children with cystic fibrosis died in their teens. “Now, they’re living well into their 40s because of careful efforts by really astute clinicians to deliver a standardized approach to care, an approach now enhanced by a terrific new drug. We measure quality care in terms of patient outcomes. That has allowed us to really understand how to effectively use antibiotics, physical therapy and how to think about nutrition – which makes a hugely important contribution that previously had been underappreciated.”

Standardizing clinical approaches dramatically improved and extended patients’ lives. “For renal cystic disease, we are beginning to do that better and better,” she adds.

There’s no targeted medicine yet for ARPKD. But thanks to an international conference that Dr. Guay-Woodford convened in Washington in 2013, such consensus expert recommendations have been published to guide diagnosis, surveillance and management of pediatric patients with ARPKD.

“There is an awful lot we can do in the way we systematically look at the clinical disease in these patients and improve our management. And, if you can overlay on top of that specific insights about why one person goes one way in disease progression versus another way, I think we can boost the baseline by developing good standards of care,” she says.

“Science does march on. There are a number of related research studies that are expanding our understanding of ARPKD. Within the next decade, we probably will be able to capitalize on not just the work in ARPKD but work in related diseases to learn the entry points for targeting therapies. That way, we can build a portfolio of markers of disease progression and test how effective these potential therapies are in slowing the course of the disease.”