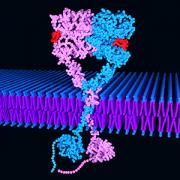 The study suggests that specific molecular responses modulated by EGFR (seen here) may be targeted as a therapeutic strategy for HX injury in the neonatal brain.

Hypoxic (HX) encephalopathy is a major cause of death and neurodevelopmental disability in newborns. While it is known that decreased oxygen and energy failure in the brain lead to neuronal cell death, the cellular and molecular mechanisms of HX-induced neuronal and glial cell damage are still largely undefined.

Panagiotis Kratimenos, M.D., and colleagues from the Center for Neuroscience Research at the Children’s National Research Institute, discovered increased expression of activated-epidermal growth factor receptor (EGFR) in affected cortical areas of neonates with HX and decided to further investigate the functional role of EGFR-related signaling pathways in the cellular and molecular changes induced by HX in the cerebral cortex.

The researchers also performed, for the first time, high-throughput transcriptomic analysis of the cortex to define molecular responses to HX and to uncover genes specifically involved in EGFR signaling in brain injury. Their results indicate that specific molecular responses modulated by EGFR may be targeted as a therapeutic strategy for HX injury in the neonatal brain.

This study defines many new exciting avenues of scientific exploration to further elucidate the beneficial impact of EGFR blockade on perinatal brain injury at the cellular and molecular levels. This analysis could potentially result in the identification of new therapeutic targets associated with EGFR signaling in the developing mammalian brain that are linked with specific long-term abnormalities caused by perinatal brain injury.

Read the full article in iScience.

Social determinants of cardiovascular health in African American children with...