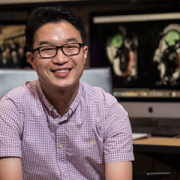 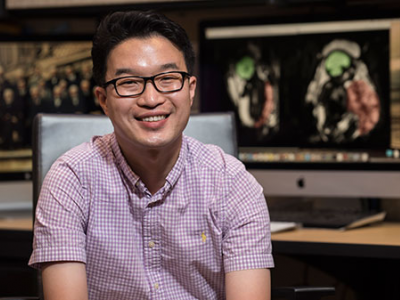 Fetuses wiggle. They waggle. Some pirouette within the womb, amniotic fluid easing their spins. Pregnant mothers’ meals and beverages from hours earlier wend their way through their digestive systems. On top of that, mother and offspring may breathe out of sync and their hearts may beat in time to different drummers.

In short, there’s a whole lot of movement going on in the womb.

As anyone trying to capture a photograph with a digital camera knows, sudden movements are the enemy of a sharp image. The challenge is the same for fetal researchers aiming to capture crisp functional magnetic resonance imaging (fMRI) of the developing brains of fetuses who are always on the move.

Over two years, a Children’s National Health System research team led by Wonsang You, a research associate in the Developing Brain Research Laboratory, worked out complex mathematical algorithms to account for independent fetal and placental motions, to erase those noise artifacts, and to validate the accuracy of the technique.

“[M]otion correction is optimized to the experimental paradigm, and it is performed separately in each phase as well as in each region of interest (ROI), recognizing that each phase and organ experiences different types of motion. To obtain the averaged [blood oxygen level-dependent] BOLD signals for each ROI, both misaligned volumes and noisy voxels are automatically detected and excluded, and the missing data are then imputed by statistical estimation based on local polynomial smoothing,” You and colleagues wrote in a technical article published recently by the Journal of Medical Imaging and spotlighted on the journal’s website as a featured article.

To underscore the work’s clinical utility, they analyzed differences in fetal motion by acquiring BOLD fMRI data from eight pregnant women with healthy fetuses and comparing them with eight women whose fetuses had been diagnosed with congenital heart disease (CHD) between 25 to 40 weeks of gestational age. The team focused on changes in oxygenation of the fetal brain and placenta during maternal hyperoxia, an oxygen challenge test during which both groups of pregnant women received 100 percent oxygen via face mask for four to six minutes. Measurements were then taken to determine whether there were differences in how the fetuses and the placentas responded to the oxygen challenge test.

Recognizing compromised fetuses in utero – and understanding the subtle but important ways they deviate from the trajectory of normal fetuses – opens a critical window of opportunity to intervene through nutritional, pharmaceutical, or surgical means – before brain injury is consolidated, says Catherine Limperopoulos, PhD, Director, MRI Research of the Developing Brain at Children’s National, and the paper’s senior author.“

Our goal is to exploit the power of MRI, a non-invasive imaging technique, to detect the earliest signs of the fetus getting into trouble before it runs into serious problems,” Limperopoulos says. “We needed the technical development described in this foundational work to allow us to reliably measure the fMRI BOLD response in the fetal brain and placenta.”

The BOLD signal can be degraded by the independent and collective movements of the mother and fetus. Traditional motion correction makes assumptions, such as treating all moving objects like the fetal brain, which is solid, rigid, and has a high range of motion. The traditional approach also fails to account for such subtleties as the placenta’s low range of motion and its flexing in response to maternal and fetal movements.

The research team employed four-step pre-processing – which included correcting bias magnetic field, correcting for global and local motion, and rejecting outliers – and followed with data imputation, an alphabet soup of letters and Latin symbols that mathematically accounts for objects (placenta and fetal brain) that move independently.“

We showed that the proposed preprocessing pipeline can be effectively employed to characterize fetal motion in healthy controls and CHD fetuses. Our preliminary data suggest that the degree of fetal motion tends to increase during hyperoxia in CHD fetuses (but not significantly). In addition, the motion of the fetal brain in CHD cases showed higher variance during hyperoxia compare[d] to controls,” You and colleagues write. “These observations suggest that the CHD fetus may be more responsive to maternal hyperoxia. However, these pilot data need to be validated on a larger cohort of healthy and high-risk CHD fetuses.”

Related resources: Research at a Glance