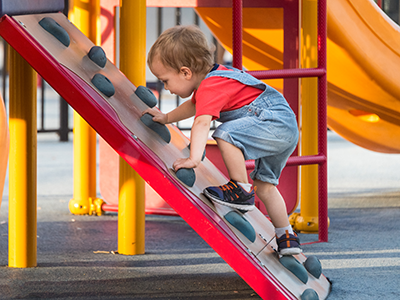 The type of hypoxia that occurs with preterm birth is associated with locomotor miscoordination and long-term cerebellar learning deficits but can be partially alleviated with an off-the-shelf medicine, according to a study using a preclinical model.

Oxygen deprivation associated with preterm birth leaves telltale signs on the brains of newborns in the form of alterations to cerebellar white matter at the cellular and the physiological levels. Now, an experimental model of this chronic hypoxia reveals that those cellular alterations have behavioral consequences.

Chronic sublethal hypoxia is associated with locomotor miscoordination and long-term cerebellar learning deficits in a clinically relevant model of neonatal brain injury, according to a study led by Children’s National Health System researchers published online Aug. 13, 2018, by Nature Communications. Using high-tech optical and physiological methods that allow researchers to turn neurons on and off and an advanced behavioral tool, the research team finds that Purkinje cells fire significantly less often after injury due to perinatal hypoxia. However, an off-the-shelf medicine now used to treat epilepsy enables those specialized brain cells to regain their ability to fire, improving locomotor performance.

Step out of the car onto the pavement, hop up to the level of the curb, stride to the entrance, and climb a flight of stairs. Or, play a round of tennis. The cerebellum coordinates such locomotor performance and muscle memory, guiding people of all ages as they adapt to a changing environment.

“Most of us successfully coordinate our movements to navigate the three-dimensional spaces we encounter daily,” says Vittorio Gallo, Ph.D., Children’s Chief Research Officer and the study’s senior author. “After children start walking, they also have to learn how to navigate the environment and the spaces around them.”

These essential tasks, Gallo says, are coordinated by Purkinje cells, large neurons located in the cerebellum that are elaborately branched like interlocking tree limbs and represent the only source of output for the entire cerebellar cortex. The rate of development of the fetal cerebellum dramatically increases at a time during pregnancy that often coincides with preterm birth, which can delay or disrupt normal brain development.

“It’s almost like a short circuit. Purkinje cells play a very crucial role, and when the frequency of their firing is diminished by injury the whole output of this brain region is impaired,” Gallo says. “For a family of a child who has this type of impaired neural development, if we understand the nature of this disrupted circuitry and can better quantify it, in terms of locomotor performance, then we can develop new therapeutic approaches.” 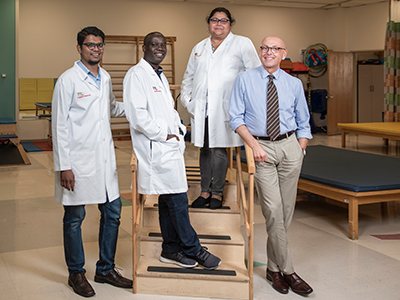 The research team leveraged a fully automated, computerized apparatus that looks like a ladder placed on a flat surface, encased in glass, with a darkened box at either end. Both the hypoxic and control groups had training sessions during which they learned how to traverse the horizontal ladder, coaxed out of the darkened room by a gentle puff of air and a light cue. Challenge sessions tested their adaptive cerebellar locomotor learning skills. The pads they strode across were pressure-sensitive and analyzed individual stepping patterns to predict how long it should take each to complete the course.

During challenge sessions, obstacles were presented in the course, announced by an audible tone. If learning was normal, then the response to the tone paired with the obstacle would be a quick adjustment of movement, without breaking stride, says Aaron Sathyanesan, Ph.D., co-lead author. Experimental models exposed to perinatal hypoxia showed significant deficits in associating that tone with the obstacle.

“With the control group, we saw fewer missteps during any given trial,” Sathyanesan says. “And, when they got really comfortable, they took longer steps. With the hypoxic group, it took them longer to learn the course. They made a significantly higher number of missteps from day one. By the end of the training period, they could walk along all of the default rungs, but it took them longer to learn how to do so.”

Purkinje cells fire two different kinds of spikes. Simple spikes are a form of constant activity as rhythmic and automatic as a heartbeat. Complex spikes, by contrast, occur less frequently. Sathyanesan and co-authors say that some of the deficits that they observed were due to a reduction in the frequency of simple spiking.

Two weeks after experiencing hypoxia, the hypoxic group’s locomotor performance remained significantly worse than the control group, and delays in learning could still be seen five weeks after hypoxia.

Gamma-aminobutyric acid (GABA), a neurotransmitter, excites immature neurons before and shortly after birth but soon afterward switches to having an inhibitory effect within in the cerebellum, Sathyanesan says. The research team hypothesizes that reduced levels of excitatory GABA during early development leads to long-term motor problems. Using an off-the-shelf drug to increase GABA levels immediately after hypoxia dramatically improved locomotor performance.

“Treating experimental models with tiagabine after hypoxic injury elevates GABA levels, partially restoring Purkinje cells’ ability to fire,” Gallo says. “We now know that restoring GABA levels during this specific window of time has a beneficial effect. However, our approach was not specifically targeted to Purkinje cells. We elevated GABA everywhere in the brain. With more targeted and selective administration to Purkinje cells, we want to gauge whether tiagabine has a more powerful effect on normalizing firing frequency.”

In addition to Gallo and Sathyanesan, Children’s co-authors include Co-Lead Author, Srikanya Kundu, Ph.D., and Joseph Abbah, B.Pharm., Ph.D., both of Children’s Center for Neuroscience Research. 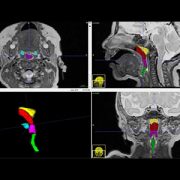