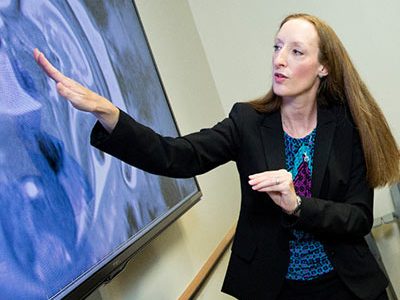 Sarah B. Mulkey, M.D., Ph.D., is lead author of a study that describes a brand-new syndrome that stems from mutations to KCNQ2, a genetic discovery that began with one patient’s unusual symptoms.

Unraveling one of the greatest mysteries of Sarah B. Mulkey’s research career started with a single child.

At the time, Mulkey, M.D., Ph.D., a fetal-neonatal neurologist in the Division of Fetal and Transitional Medicine at Children’s National Health System, was working at the University of Arkansas for Medical Sciences. Rounding one morning at the neonatal intensive care unit (NICU), she met a new patient: A newborn girl with an unusual set of symptoms. The baby was difficult to wake and rarely opened her eyes. Results from her electroencephalogram (EEG), a test of brain waves, showed a pattern typical of a severe brain disorder. She had an extreme startle response, jumping and twitching any time she was disturbed or touched, that was not related to seizures. She also had trouble breathing and required respiratory support.

Dr. Mulkey did not know what to make of her new patient: She was unlike any baby she had ever cared for before. “She didn’t fit anything I knew,” Dr. Mulkey remembers, “so I had to get to the bottom of what made this one child so different.”

Suspecting that her young patient’s symptoms stemmed from a genetic abnormality, Dr. Mulkey ran a targeted gene panel, a blood test that looks for known genetic mutations that might cause seizures or abnormal movements. The test had a hit: One of the baby’s genes, called KCNQ2, had a glitch. But the finding deepened the mystery even further. Other babies with a mutation in this specific gene have a distinctly different set of symptoms, including characteristic seizures that many patients eventually outgrow.

Dr. Mulkey knew that she needed to dig deeper, but she also knew that she could not do it alone. So, she reached out first to Boston Children’s Hospital Neurologist Philip Pearl, M.D., an expert on rare neurometabolic diseases, who in turn put her in touch with Maria Roberto Cilio, M.D., Ph.D., of the University of California, San Francisco and Edward Cooper, M.D., Ph.D., of Baylor College of Medicine. Drs. Cilio, Cooper and Pearl study KCNQ2 gene variants, which are responsible for causing seizures in newborns.

Typically, mutations in this gene cause a “loss of function,” causing the potassium channel to remain too closed to do its essential job properly. But the exact mutation that affected KCNQ2 in Dr. Mulkey’s patient was distinct from others reported in the literature. It must be doing something different, the doctors reasoned.

Indeed, a research colleague of Drs. Cooper, Cilio and Pearl in Italy — Maurizio Taglialatela, M.D., Ph.D., of the University of Naples Federico II and the University of Molise — had recently discovered in cell-based work that this particular mutation appeared to cause a “gain of function,” leaving the potassium channel in the brain too open.

Wondering whether other patients with this same type of mutation had the same unusual constellation of symptoms as hers, Dr. Mulkey and colleagues took advantage of a database that Dr. Cooper had started years earlier in which doctors who cared for patients with KCNQ2 mutations could record information about symptoms, lab tests and other clinical findings. They selected only those patients with the rare genetic mutation shared by her patient and a second rare KCNQ2 mutation also found to cause gain of function — a total of 10 patients out of the hundreds entered into the database. The researchers began contacting the doctors who had cared for these patients and, in some cases, the patients’ parents. They were scattered across the world, including Europe, Australia and the Middle East.

Dr. Mulkey and colleagues sent the doctors and families surveys, asking whether these patients had similar symptoms to her patient when they were newborns: What were their EEG results? How was their respiratory function? Did they have the same unusual startle response?

She is lead author of the study, published online Jan. 31, 2017 in Epilepsia, that revealed a brand-new syndrome that stems from specific mutations to KCNQ2. Unlike the vast majority of others with mutations in this gene, Dr. Mulkey and her international collaborators say, these gain-of-function mutations cause a distinctly different set of problems for patients.

Dr. Mulkey notes that with a growing focus on precision medicine, scientists and doctors are becoming increasingly aware that knowing about the specific mutation matters as much as identifying the defective gene. With the ability to test for more and more mutations, she says, researchers likely will discover more cases like this one: Symptoms that differ from those that usually strike when a gene is mutated because the particular mutation differs from the norm.

Such cases offer important opportunities for researchers to come together to share their collective expertise, she adds. “With such a rare diagnosis,” Dr. Mulkey says, “it’s important for physicians to reach out to others with knowledge in these areas around the world. We can learn much more collectively than by ourselves.”