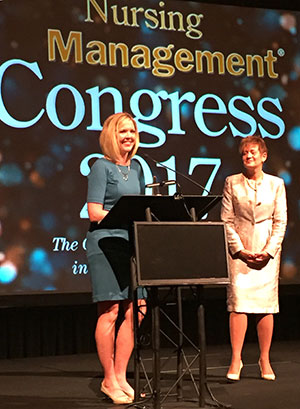 Maureen Maurano, NICU Nurse Manager at Children’s National Health System, was honored as the winner of the 2017 Richard Hader Visionary Leader Award at the Nursing Management Congress 2017 held October 2-6, 2017 in Las Vegas, Nevada. The annual award recognizes excellence in nursing leadership and awards a nurse leader who views nursing as both an art and a science by promoting caring and competence as the link between science and humanity.

The winner of the award is nominated by a colleague and is entered into the competition after the Nursing Management journal’s editorial board has received a 2,000 word manuscript detailing the nominee’s accomplishment in the planning, development, implementation and evaluation of a sustainable change in the work environment or clinical practice that has resulted in a positive outcome. The editorial board selects the winner based on the manuscript’s readability, originality, and evidence of credibility. The winning manuscript will be featured in the January 2018 issue of Nursing Management.

“I am truly honored to have accepted this Visionary Leadership Award, however, this could not have been achieved without our amazing leadership and nursing team,” says  Maurano. “It is truly a team effort that empowers our success on a daily basis in providing the most innovative and world-class care for our patients at Children’s.”

Vice President of Nursing and Chief Nursing Officer, Linda Talley says, “Maureen is an outstanding nurse leader who exemplifies our core values – commitment, compassion and connection – through her engagement of others, creating a positive work environment and driving change that has a positive influence on the professional practice of nursing.  We are very proud of her and the recognition she has so deservedly earned.”

With a crowd of over 2,000 medical professionals, Maurano accepted her award as a leader of excellence representing the U.S. News and World Report #1 NICU for babies. Congratulations again Maureen for receiving this great honor!